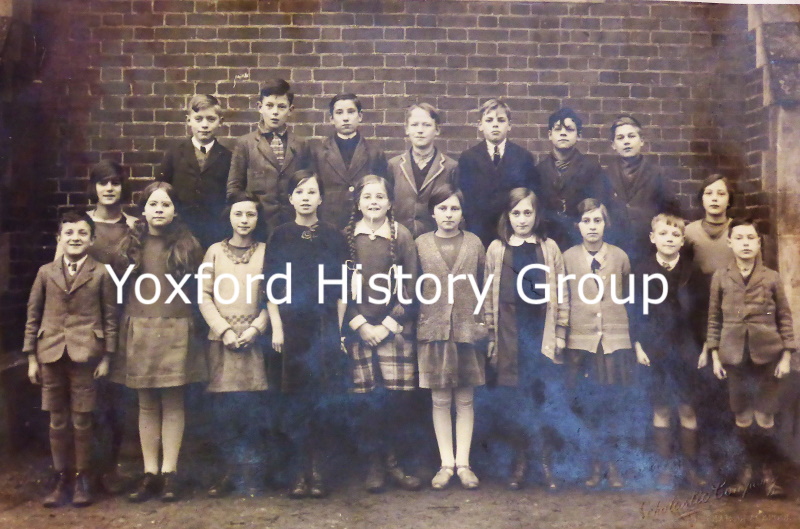 When I reached five, in 1923, I started going to school which was not very far from our home.  Looking back I think I enjoyed it. The building was well built, a clock tower rising from the centre of the roof.  The bell in the clock tower was rung at ten minutes to and five minutes to nine. There were four rooms, three of equal size and a larger one which had a movable screen to divide it.  I never remember the screen being moved. An open fire in each room provided warmth in the winter. This was good if you sat at the front but not if you sat at the back. Mr Busby was in charge, his wife took the beginners in class one, Miss Dobson taught class two, Miss Ashford took class three and Mr Busby taught classes four and five.  The school never closed because of bad weather. Miss Dobson cycled five miles and Miss Ashford seven miles. Some children had to walk three miles to school and it was terrible for them when it was raining. The cloakroom smelt of wet clothes.

In class one we had slates and slate pencils.  We used emery paper to keep a point on these pencils.  We got the emery paper from Mr Thompson who had a shoe repair shop in Brook Street.  He cycled to work from Carlton, three miles away using only one pedal. He had a false leg as he had lost his leg in an accident with a threshing machine.

After I had been at school for about two years, Mr Busby and his wife retired, Mr Jennings came as headmaster and then things began to change.  We had sports day, football and cricket in their seasons with matches against nearby schools. There was a school in nearly every village then. We paraded outside the church on November 11th, Remembrance Day.  I never understood really what it was all about and we had to stand still for two minutes. I was concerned seeing seemingly old ladies, dressed in black crying.

The old church school in Brook Street was put to good use being used on Mondays and Fridays for the girls to do laundry and cooking.  The boys used it on Tuesday to learn basic carpentry then went on to make things under the guidance of the teacher. He was good and no one was afraid to ask for his help.  I made a baking board, as did some of the other boys. Mother was pleased and used it, instead of her deal topped table. For Father, I made a pipe rack, in mahogany, which he used for the rest of his life.  One day I was given the task of making a rain gauge. It was an oblong box, with a door on one side and a hole in the top. I then had to make a tin can to stand inside and this had to be exact. In the top there was a funnel to catch the rain, again this had to be the right size.  To finish, a strip of tin was cut and marked to measure the rainfall. A thermometer was also fixed on the side of the box and the whole thing stood in the middle of the vegetable patch. Every morning, after assembly, I went to record the rainfall, if any, and the temperature on a chart.  There were six plots in the school garden, where we learnt how to dig and plant, care for and harvest the vegetables. There were three boys to each plot. There was a shed for the tools which we used and took care of, cleaning and rubbing them with oil .On wet Fridays instead of gardening we did art, using chalk crayons, or we might do basket and raffia work

We also had a meadow for football, cricket etc.  Flip was a game we played with cigarette cards. One card was stood up by the wall and with another card, in turn, we flipped a card to try and knock it down.  The one who did knock it down won all the cards. Father smoked a pipe, we didn’t have many cards but one set of cards had plans and measurements of things to make.  As a result Mother obtained a coalbox and a meat safe. Sugar, from the grocer, was bought in blue bags, which was weighed out from a fair-sized wooden box. These boxes could be bought for sixpence.  Father bought one of these boxes and took it apart, carefully saving and straightening the nails and produced a coal box which stood near the fireplace. He did the same with another box and made a meat safe.  All he had to buy was perforated zinc hinges and a small bolt. These lasted many years with a coat of paint. One of these boxes also made a truck, fitted with pram wheels.

In the autumn after our summer break we all had the afternoon off school to pick blackberries to raise money for much needed sports equipment.  There were a large number of fields that were not cultivated and were overgrown, in these fields the best berries were to be found. The girls always picked more than the boys did.  I think the blackberries were used to make dye.

When the dentist came to inspect our teeth he always gave us toothpaste and toothbrushes.  As well as the dentist we had visits from the “Big game hunter” (the nit nurse) to look at our hair.  Another person who visited the school was Mr Offord, he rode a bicycle to get round on as he had many schools and homes to visit.

Frank was born 18th April 1918. By 1939 he was a private gardener. He grew up at Railway Gate House on the Middleton Road, where his father Walter was crossing keeper. His mother was Harriet (nee Elmy). Frank later worked as a handyman for both Dr Marriott and Dr Forster. He lived in Pinns Cottage, off Brook Street. 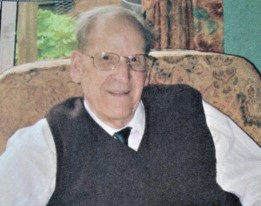 Frank on his 90th Birthday