Claim To The Throne 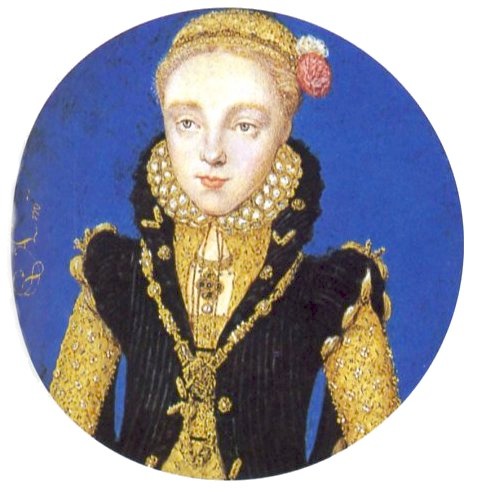 When Henry VIII made his deathbed will he obviously took for granted the continuance of the Tudor line through his heir, Edward, Prince of Wales (destined at one point to marry his infant cousin Mary Stuart). The other names given in the succession were no doubt thought to be no more than a necessary formality.

When Edward took the throne as Edward VI all seemed set fair but the new King's health was never robust & when, at the age of 15, he fell mortally ill a new succession had to be considered.

Edward was an ardent, reforming Protestant & this meant that he decided to ignore his father's will & exclude his older half-sister, Princess Mary (de-legitimized by Henry & furthermore a staunch Roman Catholic). Next exclusion was Princess Elizabeth. Elizabeth was the product of a bigamous marriage, Catherine of Aragon being alive when Henry remarried. In addition Anne Boleyn, Elizabeth's mother, was an acknowledged adulteress who had been tried, convicted & executed.

After these two exclusions Edward reverted to the order of succession as set down by his father. Edward's last will (signed on his deathbed) therefore gave as his heirs the three Grey sisters, Lady Jane, Lady Katherine & Lady Mary.

The Grey sisters were the granddaughters of Henry's younger sister Princess Mary, Duchess of Suffolk & Dowager Queen of France. The sisters' claim was placed above those of the descendants of the older of his two sisters, Margaret, Queen of Scotland. Margaret's granddaughter, Mary Stuart (the only child of James V & Queen of Scotland from infancy), had been sent to France at the age of 5 as part of a marriage treaty & as a future Queen of France (& a Catholic) was clearly unacceptable as a candidate.

To Edward the Grey sisters' Protestant faith was all-important & hence their nomination as his successors. However, changing Henry's order of succession was inherently problematic – factions would form, sides would be taken.

Poor Lady Jane Grey was to be exploited by just such a faction when she was married off to the son of the ambitious Duke of Northumberland. The Duke saw his route to power & duly declared Jane Queen (citing Edward VI's will). However this manoeuvre did not command general support & Princess Mary (mustering her forces at Framlingham Castle) seized the throne. Jane (who had in fact no ambition to be Queen) was eventually charged with treason & duly executed.

The new Queen, Mary I, was 38 at the time of her marriage to Philip of Spain but she still hoped to bear a child. False pregnancies & miscarriages followed & the succession had once more to be considered. Mary's first cousin (daughter of Henry's sister Margaret by her second marriage) was Mary, Countess of Lennox & for a time the Countess was considered a possible heir.

Mary I's claim to the throne was based on her position in Henry VIII's order of succession (next after Edward, Prince of Wales) but she evidently felt disinclined to acknowledge the claims of the other named candidates. Only after her final failed pregnancy did Mary indicate that the throne was to pass to her half-sister, Elizabeth (who had herself only narrowly escaped execution).

Elizabeth, once safely crowned, then embarked on the game-playing which would characterize her entire reign. Early in the reign Lady Katherine was favoured (as the next in order of succession after Elizabeth, Katherine's claim to the throne was indisputable) but problems arose when the two strong-willed & intelligent women clashed in front of the entire court. Tall, with red-gold hair & blue eyes, Lady Katherine was considered a beauty. She was also well-educated & a woman of some spirit. These qualities did not endear her to the Queen. Elizabeth did not care for rivals & after this display of defiance Katharine fell from favour.

Katherine, like her sister Jane, was treated as a pawn in the power game & the ambitious Earl of Pembroke duly persuaded her to marry his son & heir, Henry, Lord Herbert. Once discovered, this marriage was promptly annulled (on the grounds of non-consummation).

Lady Katherine was evidently a loose cannon for in due course she again entered into a clandestine marriage. This was with Edward Seymour (recently created Earl of Hertford). In advanced pregnancy Lady Katherine was obliged to advise the Queen of her marriage. Elizabeth was doubly enraged because not only was it treasonous for a member of the Royal family to marry without the sovereign's permission but in addition she had her own plans for Katherine (an alliance with a contender for the Scottish throne).

The new husband & wife were therefore promptly dispatched to the Tower. The Keeper permitted conjugal visits & after the birth of the first son, another followed. Katherine's position in the order of succession meant that this new dynasty could constitute a threat to the Queen so Elizabeth took action. The sons were declared bastards & Katherine was sent away to be kept under house arrest with various trusted courtiers.

As befitted her rank Lady Katherine was kept prisoner in a series of substantial country houses. Lying on a north-easterly trajectory out of London , these were Pyrgo Place (a former royal residence), Gosfield Hall, Ingatestone Hall and then finally, in 1567, Cockfield Hall, Yoxford. Here she was placed in the care  of Sir Owen & Lady Hopton.

After six & a half years of close confinement Katherine was in fragile health and in the winter of 1568 she finally succumbed to tuberculosis (although she may also have refused food). As death approached she observed; “No, no, my Lady Hopton, my time is come and it is not God's will that I shall live longer. And His will be done and not mine”.

Elizabeth's claim to the throne was secured upon her being placed third in Henry VIII's order of succession. By refusing to accept Lady Katherine's claim as next-in-line to the throne Elizabeth was defying the terms of her father's final will, the very will that had given her own claim legitimacy (for many the taint of Elizabeth's bastard status never left her & she remained in peril of assassination for her entire reign).

As de facto heiress presumptive Lady Katherine was a continuing threat to the Queen's stability on the throne for whereas Elizabeth's dubious descent could never be other than controversial, Katherine's Royal descent was entirely without blemish. Elizabeth might ignore Lady Katharine's claim to the throne of England but she could never overturn it.

For this reason, it was said that the Queen feared Lady Katherine.