This housed Sibton Orphans’ Home, which was founded in 1866 by Miss Margaret Green. The intention was to provide a happy home for a limited number of orphan children ‘of a superior class from all parts of England’ left destitute. A family of nine children of her acquaintance had been left orphans. She and her sister set up an institution to prevent any of the children, or others in similar circumstances, having to go into a workhouse. Children began to be admitted in March 1868. Boys were eligible for admission between the ages of four and eight and girls up to the age of ten.  Anyone sending a child had to give £10 for orphanage funds. The children were partly supported by the proceeds of the sale of needlework, but chiefly by subscriptions and voluntary contributions.

At the age of 12, having received a good rudimentary education, boys were sent to a gentlemens’ school for two or more years before being ‘placed out in life’, having learned a trade or profession.

The girls were educated for governesses or teachers in schools, or apprenticed to a suitable business.

In 1885 there were 30 inmates. Miss Green died suddenly in 1888 and the children were moved to Great Yarmouth.

Hope House was later used to house workhouse children by Blything Poor Law Union, which came into existence in 1835, (replacing the earlier Blything Hundred Incorporation, of 46 parishes, including Bulcamp Workhouse). There was a Board of Guardians, 60 in total, representing the then 49 parishes. There were two Guardians for Yoxford parish.

By 1913 the Union had opened a Children’s Home at Hope House. In 1924 it could accommodate 35 children, with Miss E Dowsett as Superintendent. By 1929 the children, with Miss Dowsett, moved to new premises at Halesworth, where 40 children could be housed. 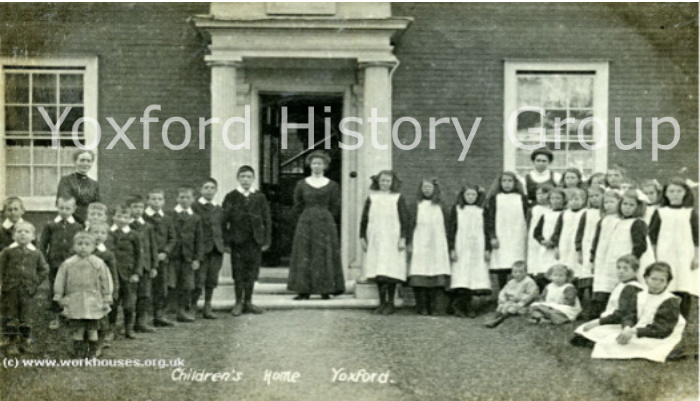