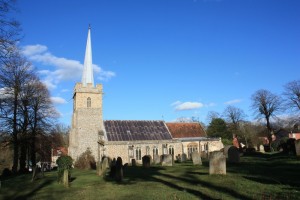 A little bit of our history

St Peter’s church and tower were built in the fifteenth century. There was a church in Yoxford, maybe in timber, at least as early as the reign of Edward the Confessor, but there is no record of its appearance.

Yoxford is unusual in having three large mansions within its boundaries: Cockfield Hall, Grove Park and Rookery Park. The histories of the families who lived here are commemorated in the memorials and hatchments in the church. The hatchments are considered to be the finest in Suffolk.

The pulpit dates from 1620, the font from1518 and the bells have rung out to call people to worship since1665.

By 1837, Yoxford, already a coaching stop on the London to Yarmouth road, had grown into a prosperous town. The church was extended, to accommodate a growing congregation.

St Peter’s is part of the Yoxmere Benefice of eight parishes.

Services are at 9.30am every Sunday, except the first Sunday of the month when there is a combined Benefice service in one of our parishes at 10am. Times and details of services are also published in the Fisherman and on local notice boards.